Reservations are highly encouraged to guarantee equipment and to avoid waits!

Everything You Need To Know About Playing Woodsball 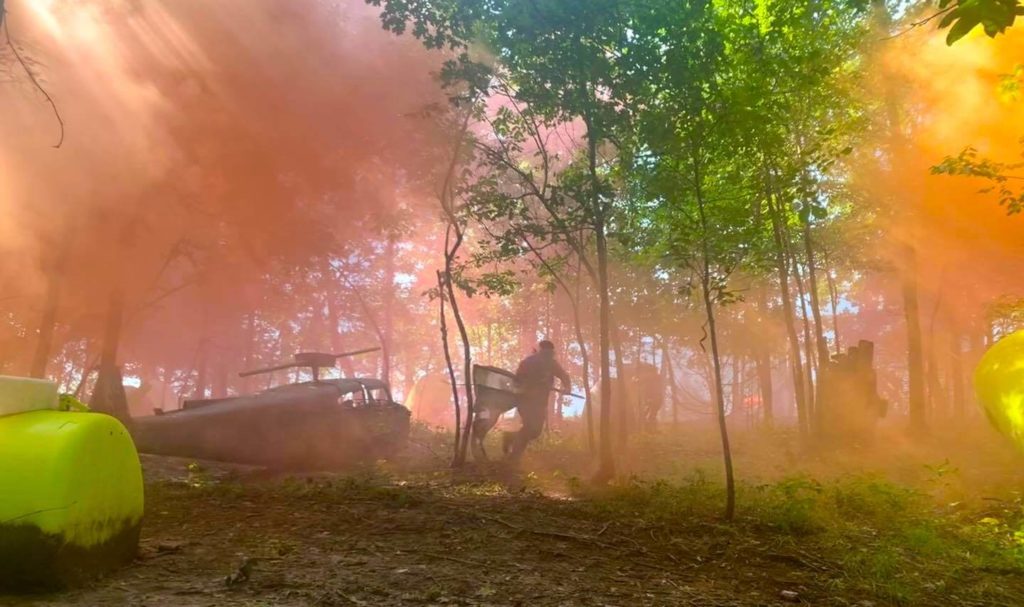 Are you feeling adventurous and want to try an activity that’s fun, strategic, and will get your adrenaline pumping, all while enjoying the great outdoors? Woodsball may be just the thing for you, and you can try it at Action Town Park in Mayflower, Arkansas!

Woodsball is a form of paintball that’s played in the outdoors. It involves strategy and tactics in addition to raw shooting skills. It allows for a wide variety of rules, but you usually attempt to eliminate the opposing team with a paintball marker.

The rest of this article will explain what Woodsball is in detail, the difference between Woodsball and speedball, specify the different types of Woodsball, and discuss the strategy and equipment involved in a Woodsball game. Keep reading if you’re curious about this thrilling game!

Woodsball is a type of paintball in which teams compete in varied terrain outdoors. This allows for many play options, including strategy, tactics, and shooting skills.

Woodsball is the most popular form of paintballing, and it’s most commonly played in wooded areas. However, despite the name, Woodsball doesn’t necessarily have to be played in the woods. Another common setting for Woodsball is a mock-up battleground, which can be constructed in any open landscape. Wherever Woodsball is played, it’s played mainly for fun rather than spectators.

This activity is named after the woods where paintball first began in 1981. In the first form of this game, players used marker pistols to play a strategy war game in the woods. In the spirit of this beginning, Woodsball is now often used with scenario paintball, in which players take part in a story or remake a historical battle.

The basic goal of paintball still applies in Woodsball: the principal aim is to attempt to eliminate your opposition with a paintball marker.

The weather, vegetation, and terrain involved with Woodsball make it exciting and new every time, as you may get some curveballs thrown your way. For example, the temperature can affect propellant tank pressures, fog can influence your visibility, shade can change your cover, and the wind can alter your paintball trajectory.

How big your team is will also affect the range and scope of the game and how long it takes. Sometimes it takes a while before the opposing teams even see each other on the field.

What’s the Difference Between Woodsball and Speedball?

The main difference between the two types of paintball you can play, Woodsball and speedball, is the environment in which gameplay occurs. Woodsball is in an outdoor setting with natural obstacles and bunkers, whereas speedball takes place in an artificial environment, such as an inflatable bunker or on a turf field.

Another difference is that speedball tends to be quicker because the size of the field is smaller. Woodsball takes more time because there’s more strategy involved in the gameplay. The field is larger and with more obstacles, making it more difficult to locate your opposition.

Furthermore, because of the limited space, speedball teams are usually smaller than Woodsball teams. With Woodsball, there’s more room to spread out, which means more people can play. If you have a large group that wants to play paintball, Woodsball is the better option.

Speedball is best for improving shooting skills, as you need to move quickly and shoot accurately to be successful. On the other hand, Woodsball is the better choice for improving strategy and tactical skills.

Both types of gameplay are fun and great ways to spend time with friends, as well as make new ones. We offer both kinds at Action Town Park, so why not give both types a try?

There are a variety of different types of Woodsball that you can play. The most popular ones are elimination, attack and defend, and two-flag, but other variants are just as fun. Let’s take a look at each one in detail:

Whichever kind you play, you’re going to have a blast!

Woodsball is deemed more strategic than speedball because players can choose different equipment based on their assigned role on the team. This role is often based on realistic military roles, but it’s ultimately up to the team and the player to decide how they’ll participate.

The terrain and weather also contribute to Woodsball being more strategic than speedball. Woodsball fields contain natural and artificial structures that alter gameplay, and the weather conditions can influence how successful or unsuccessful players are on the field.

A player’s equipment in Woodsball depends on their style of play and their position on the team. Often, standard paintball equipment is used, but certain manufacturers market some of their products as Woodsball-specific because they’re more reliable in outdoor conditions.

The standard paintball equipment includes a paintball marker, paintballs, a harness, and a protective mask. Additional gear, such as gloves and padding, may be helpful in outdoor conditions. Many players opt to wear camouflage to blend into the outdoor environment and hide from the other team.

We recommend getting paintball gloves for outdoor play. The HK Army Paintball Pro Gloves, available in our pro shop, are a great choice. Their two-finger-less design allows for rapid firing and the neoprene padding protects your hands from stones, plants, and other outdoor obstacles while you’re making your way around the field.

For camouflage, we recommend the Carhartt Active Jacket, also available in our pro shop. The material is designed for movement and the camo print blends in nicely with our Arkansas environment.

Now that we’ve answered your questions about playing Woodsball, you can give it a try at Action Town Park! We have two exciting fields to choose from: Wastelands or Kamikaze Village. Whichever one you choose, you’re bound to have a great time strategizing, stalking, and shooting in the natural outdoors!