Reservations are highly encouraged to guarantee equipment and to avoid waits! 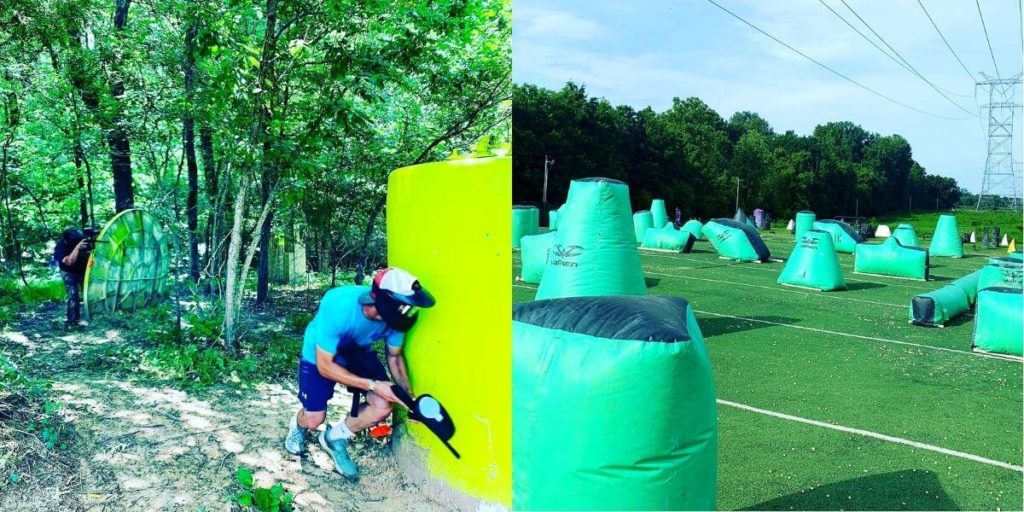 Woodsball and speedball are two main ways to play paintball, a popular and adrenaline-filled outdoor sport. But what exactly is the difference between the two?

Woodsball and speedball have many differences, including the playing field size, team size, terrain, firing rate, and weapon type used. Woodsball is slow-paced and can last hours, while speedball is faster and quickly eliminates players. Woodsball is also called scenario or tactical paintball.

This article will explain the differences and similarities between woodsball and speedball.

Differences Between Woodsball and Speedball

If you’re new to paintball, you may be unaware of the differences between woodsball and speedball.

Below is a table summarizing the differences and similarities between these two popular methods of playing paintball:

Let’s take a look at these differences in more detail below:

When playing speedball or woodsball, you need to protect your face with protective goggles. Elbow pads, knee pads, and gloves are optional for added protection, and players with sensitive hands sometimes wear Tippmann Armored Gloves (available to purchase in the ProShop at ATP) with padding around the knuckles. These gloves give them further protection against the paint and the elements.

Most paintball venues offer protective gear for rent. At Action Town Park in Mayflower we provide top of the line protective face masks!

Woodsball is played mainly in natural terrain, and players need to blend in with the surroundings to avoid detection.

Woodsball players typically wear military-style camouflage clothing or apparel in dark or brown-green colors. Some woodsball players dress according to the season: medium to dark green clothing in the summer and brown attire in the winter.

The speedball playing field is smaller, and it’s common for players to get shot at short range. Thick fabric, baggy pants, jeans, or cargo pants are perfect as these offer more resistance if you’re shot on the legs.

Old sneakers and a thick hoodie that you don’t mind messing up with paint are ideal for speedball.

When playing woodsball, your paintball gun needs to shoot in a long-distance range due to the larger playing field. Popular woodsball paintball weapons include military replicas, mechanical paintball, and electro-pneumatic guns.

The most suitable paintball guns for speedball, on the other hand, are those that can fire rapidly in a closer range so that you can eliminate your opponents and defend yourself effectively. The most high-tech electro-pneumatic guns allow you to achieve this.

Woodsball (as its name implies) is often played in the woods or in another natural area where there are plenty of trees and bushes to use as natural bunkers.

Some woodsball playing areas are divided into subsections, and players can use specific areas, depending on the game mode or scenario they’re playing.

The speedball playing area is typically smaller and is often a flat, open field with artificial obstacles functioning as bunkers. Some paintball venues have indoor speedball facilities.

Woodsball offers players plenty of hiding places and space to hide, plan attacks, and work out defense mechanisms. Since your opponents aren’t likely to be close by, you don’t have to move as fast between bunkers. This makes it slow-paced and more drawn out than speedball.

While playing woodsball, you may have long periods of inaction as you hide from your opponents.

When playing speedball, the fast pace is apparent with a lot of adrenaline as you quickly eliminate opponents and defend yourself against your opponents. There are fewer bunkers behind which to hide, making the players more vulnerable to attack and forcing them to move quickly between hiding places and react fast.

A woodsball game can easily take a few hours (or even the entire day), while speedball is often over within one hour, making it ideal if you don’t have a lot of time.

Speedball has a smaller playing field with fewer obstacles, giving you fewer choices and less room to plan your attack and defense strategy.

It’s the perfect game for folks who enjoy competition because it’s action-packed, requiring players to attack and defend themselves constantly.

Speedball focuses strongly on the volume of fire, while being successful at woodsball means you need to plan surprise attacks carefully with less intense firing involved.

In speedball, it’s easy to communicate and change your team strategy as all your team members are close by and the teams are smaller. Speedball team members often shout instructions at one another to warn them of a lurking opponent or give instructions.

With its military influence, some woodsball games include military mission games, including the following:

Communicating with fellow teammates during a woodsball game is challenging due to the large playing field. Shouting out to a teammate would give away your hiding location, making you vulnerable to being attacked. Some woodsball players use walkie-talkies to overcome this problem, though.

Therefore, to be successful at woodsball, your team needs to plan their strategy before heading out into the field.

Woodsball typically has larger team sizes than speedball as the playing field is much larger, making it easier for team members to spread out and find hiding places. Some woodsball teams can consist of a thousand members.

Speedball, in contrast, can accommodate a limited number of players before the playing area becomes too congested. Speedball teams commonly consist of around five to ten players, and it’s a popular activity for team building, having fun with friends, or for bachelor parties.

Woodsball involves plenty of strategizing, large teams, and long periods hiding behind bunkers. The terrain is typically natural and large.

Popular woodsball attire blends into the surroundings, such as camouflage or brown-green-colored clothing. Suitable speedball clothing is baggy pants made from thick fabric and thick hoodies to protect oneself.

Playing speedball is adrenaline-filled as you need to move quickly between the artificial bunkers to avoid being shot, and the game is often over within an hour.

Hopefully, this has given you enough ideas of both to help you get started, even as a newbie to the world of paintball!

When you rent gear the Saturday before!